What is wrong with KENYSZI? 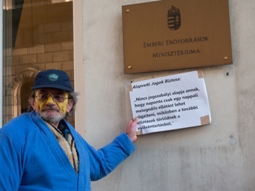 The Centralized Electronic Registration of Recipients of Social Services (KENYSZI) was introduced in 2012 as a way to keep track of the users of all social services in Hungary including support for homeless people, the elderly, disabled people and children. The development of the system was co-financed by funds from the European Social Fund under TÁMOP 5.4.2-08 and TÁMOP 5.4.2-12. Over time, it has become clear that for homeless people, the introduction of KENYSZI has made life – even survival – more difficult. The City is for All (A Város Mindenkié) is fighting for a social services system that is transparent, humane, respects privacy and ensures that no eligible citizen is denied a service because of bureaucratic reasons or exposed to discrimination. In its present form, KENYSZI does not meet these requirements.

There are at least three areas where serious and unlawful practices occur frequently in the daily practices of KENYSZI. 1. Lack of financial transparency and unclear regulations 2. The exclusion of homeless people from fundamental services 3. Abuse of confidential personal data. As we find it unacceptable that public funds are used to support such an unlawful system, we are turning to the European Social Fund, the European Commission and the European Ombudsman with complaints against the Hungarian government.

A government decree formulated in 2006 required the mandatory central recording of the beneficiaries of social services and set the starting date of the system for July, 2012. As the original Decree states, the authorities (in this case the National Rehabilitation and Social Office, NRSZH) have the power to check whether on any given day the same person registers for services that legislation does not allow to be used simultaneously. With regards to drop-in centers for homeless people, the relevant budgetary law states that they are not compatible with the provision of social meals or at-home services. In other words, these assistances cannot be used by the same person on the same day. At the same time, the law does not define how many drop-in centers a homeless person is allowed to use per day, nor does it say that the various services provided by these centers are counted as one single service or as separate services.

At the moment, all drop-in centers in Hungary provide the basic services mandated by law including a place to rest, the opportunity to warm up food and a place for community life. However, because their capacities are often limited, drop-in centers are not able to provide all of the services to everyone who would be eligible. For example, often there is only one washing and drying machine in a drop-in center, which allows about 5 to 10 people to do their laundry a day. As there are many more people who need to do their laundry, there tend to be long waiting lists for the washing and drying machines. In addition, many drop-in centers are physically not equipped to provide services that are not mandated by law, but are also necessary for everyday survival such as warm food, storage of bags and Internet. In Budapest, for example, there is no drop-in center at the moment where all of these services can be reached simultaneously by all the clients. In all, the quality and capacity of drop-in centers show a great variety and homeless people are forced to migrate between the various service providers to satisfy their basic needs.

Even though it is not stated by any law, NRSZH and EMMI (the Ministry of Human Resources) are of the opinion that a homeless person can use the services of only one drop-in center a day. According to the authorities, this means that a homeless person may go to any number of drop-in centers, but only the first place will be reimbursed for their costs. Even if the other ones register the person and provide them services, their registration will be deleted from the system and they will not get reimbursement. In practice, this means that if a homeless person receives a sandwich in one drop-in center, rests at another and uses the computer at a third, only the first of these institutions will be reimbursed and the rest will be deleted from the system. This “rule” lacks any legal foundation, which has also been confirmed by the Commissioner for Fundamental Rights on several occasions.

This arbitrary regulation has created a very dangerous situation for homeless people as they are often forced to choose between doing their laundry, taking a shower, using the internet or having a meal. The only reason why the system has not collapsed yet, is that social service providers have chosen different strategies of survival. On the one hand, some service providers have decided not to allow a homeless person to enter the drop-in center if they have been registered elsewhere earlier that day. Other organizations, however, especially the larger ones, have decided to ignore this “rule” and allow homeless people to use their services regardless of their registration status. At this moment, it is because of the “disobedience” of these services that homeless people are still able to access most of the services they need. However, as NRSZH proceeds with its annual financial monitoring, some of these “disobedient” organizations have already been denied funding for those clients who were previously registered elsewhere. This could mean the loss of millions of HUF for such organizations.

In addition to these concerns, serious issues of privacy arise with regards to KENYSZI. For fear of losing their funding, homeless clients are often registered by social organizations for services, which they have not used. This is not only problematic because their data is being misused, but also because they may not be able to use the services of another drop-in center on the same day. Unfortunately, neither NRSZH, nor the social service providers provide meaningful information about the possibilities for legal remedy in case someone has been denied a service because of the abuse of their data, which raises serious concerns regarding fundamental rights.

In general, The City is for All does not condemn the keeping of records about the use of social services. However, the operation of such a system should not lead to the denial of services to eligible citizens, the reduction of funds to social service providers and the misuse of personal data. We find it unacceptable that anyone should be excluded from basic services for administrative reasons! Therefore, we ask the European Social Fund, the European Commission and the European Ombudsman to investigate how the funds of the European Union are used by the Hungarian government and take steps to remedy the social and legal injustices that are committed against the homeless citizens of Hungary through the use of these funds.

More information about KENYSZI in Hungarian.