The Hungarian Parliament dominated by the governing party has passed a series of laws since 2013 that facilitates the persecution of homeless people: the fact that habitual residence in public space can be punished in areas defined by municipalities had been first included in the Fundamental Law and then added in the Law on Misdemeanours.  Experience has shown that the previous Misdemeanour law has not been enforced: we request the misdemeanour statistics each month from the Ministry of Interior, and the data prove that no misdemeanour infringement procedures have been initiated against homeless people for living on the streets since November 2016 – and it is not because people have stopped living on the streets. 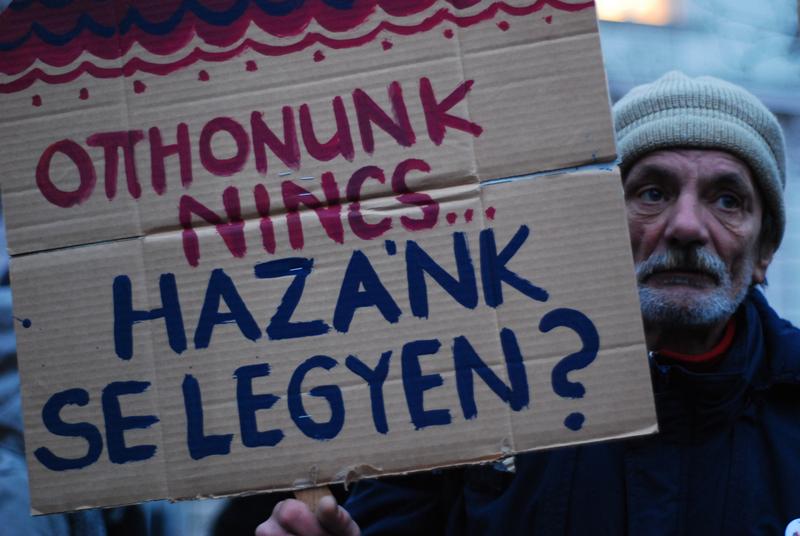 The amendments soon to take effect were first sparked by the fantastic proposals of the new FIDESZ MP, Istvan Bajkai, who started campaigning for the legal ground to persecute residence on public premises for habitation already back in summer. He claimed there were enough places in homeless shelters (there are not), and that it was unpleasant and disturbing to look at homeless people. We also do think that it is unpleasant and disturbing, especially for those who actually have to live on the streets, and especially on behalf of the leaders of this country, who have failed to show the necessary expertise, will and humanity to at least somewhat decrease the housing crises affecting millions. What we believe can solve this problem is enforcing the right for housing, and not the incarceration of the most vulnerable group of the society.

Legislation seems to be working really smoothly and efficiently in these cases, unlike when it is about voting against the eviction of families with children without a housing solution. Amendment 7 of the Fundamental Law was passed without hesitation, since then it has been even more prohibited to be homeless.

Further possible consequences have been brought to our attention by Utcajogász, such as:

The main question is what the government really wants with the amendment of the Misdemeanour Law. Whether they want to punish and incarcerate masses of homeless people living on the streets or use them as a diversion, to set the tone of “we will clean the streets so nobody will have to face the consequences of the inequalities of the society” is unclear.

In case the amendment is not a political manoeuvre to blindfold the public about the facts that there are 2-3 million people living in housing poverty, that 120 people froze to death last winter and that there is an average of 22 families evicted on a daily basis, and the real goal is punishing people, then it is one of the most inhuman measures against the homeless by the government. To put it bluntly, if you are unfortunate enough to have to live on the streets and you do not accept the social care, you risk being put behind bars. It is not difficult to foresee the extrusion of homeless people from visible public spaces or their forced incarceration. However, it will not decrease the number of homeless people; they will only be less visible. We must underline, The City is for All does not fight for the right to live on the streets, but for a system where everybody has a housing solution. The goal is not the right to live on the streets but the right for housing.

This measure will ruthlessly violate human rights once again, and although we are kind of getting used to it, we will not accept it. If this law is actually obeyed, and, unfortunately, recent news increasingly reflects it to be so, we will also take our own measures. The disappearance and incarceration of people is not a solution. Poverty cannot be put behind bars.

In the meantime, we continue our work, and fight to save even more people from having to experience homelessness. If you agree with our goals, please sign the #stopkilakoltatás petition to put a halt to the reproduction of homelessness and children getting into foster care. Should you want to demonstrate against the inhuman Misdemeanour Law, come to the “One Sentence” demonstration on October 14, organised with Virág Erdős, poet and other contemporary writers.