"Being homeless is not a crime!" Call for action: International solidarity with homeless people in Hungary 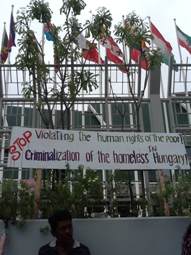 We invite our friends all over the world to join our struggle against the criminalisation of homelessness in Hungary.

The 2010 election brought a comprehensive authoritarian and punitive turn in Hungary: constitutional democracy was essentially abolished; labour rights were curtailed; entitlement to welfare benefits was restricted and a harsh workfare regime was implemented; asylum-seekers became subject to an unjustifiable detention regime; increasingly severe penal policies were introduced with disproportionate sanctions; the surveillance of state employees was authorised on an unprecedented scale. Since the transition to capitalism in 1990, the poverty rate and the level of income inequality have never been as high as now.

Despite years of advocacy and protests, homelessness became a punishable offence in Hungary. In November 2012, the Constitutional Court struck down a law that criminalised street homelessness, arguing that the state should address homelessness as a social and not a criminal issue. In response, the governing party decided to change the Constitution itself, enabling local governments to punish “habitual residence in public spaces”. Homeless people can already be subjected to compulsory community work, monetary fine and imprisonment in most parts of Budapest, and several local authorities outside of the capital are also criminalising homelessness.

We, homeless and ally members of The City is for All are asking you to help us abolish this inhumane piece of legislation and express your solidarity with homeless people in Hungary.

If your time and resources allow, please organise a solidarity demonstration on one of the days between 13-15th of February, ideally in front of the Hungarian embassy or consulate in your country. If you do so, please send us pictures or videos so that we can publicise on our website and Facebook-page the international protest against the ongoing war on poor people in Hungary.

We hope that you will find a way to support our struggle. If you have any question regarding the event to be organised, the documentation, or the criminalisation of homelessness itself, please contact us at avarosmindenkie@gmail.com.

* English translation of the main legislation on criminalisation

* a video on criminalisatoin by the Hungarian Civil Liberties Union