Where is God sometimes? An open letter to Pope Francis 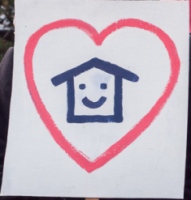 We are members of The City Is For All, an organization based in Budapest, Hungary, and we are all homeless or struggle with serious issues of housing. We are writing to you because we would like you to know how the Hungarian state treats those homeless who, like many of us, are forced to live in public spaces.

On October 15, 2013, a new law was passed that declared it an infraction to "habitually reside" in public spaces that are part of the country’s World Heritage Sites. With that, "offenders" can be sentenced to communal work, be fined or ultimately jailed if they are found living on the streets of downtown Budapest or Pécs.  During the month of November, Budapest as well as many other cities in the country have passed local laws that defined even larger areas where homeless people can be prosecuted because of their social and housing status. Effectively, Budapest in its entirety became an “anti-homeless” zone!

As you may know, Hungary’s current government is run by a coalition that emphasizes Christian values; indeed, the name of one of the coalition parties is Christian Democratic Party. Almost all members of these governing parties have voted for  national and local laws that have outlawed homelessness, even though a number of religious organizations have opposed this legislation. Among others two rabbis, the representatives of the evangelical church, the Community of Sant'Egidio and the Bokor Community have all spoken out publicly against these measures.

In the name of all homeless people living in Hungary, we would like to ask you to turn your attention to our country’s rapid decline into deep poverty. The hardships of our nation are disconcerting to us and we find it inhumane that people can be treated like this. It seems as though they are trying to wipe us out of existence. Many homeless people believe in God, a conviction that often helps them overcome their hardships. However, the secular powers no longer seem to consider homeless people as human beings!

With your help, we would like to touch the eyes and the soul of the world and make them aware of our situation. Almost everyone looks down on us and harasses us because we don’t have a home, yet we are people, too, made of spirit and flesh. Love, peace and calm need to triumph in Hungary and we respectfully ask you to speak up against the institutional harassment of homeless people in our country and help us end hatred, violence and destitution.

homeless members of The City Is For All

The Hungarian version of the paper can be accessed here.