Open letter to UNESCO by homeless people in Hungary 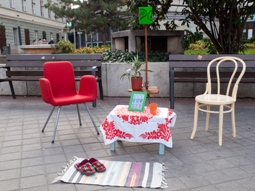 We are writing to you as a final resort. We are members of a Hungarian community organization, The City is for All, in which homeless people and their allies work together for dignified housing for everyone.

On September 30, the Hungarian Parliament passed a law on the persecution of homeless people. According to the legislation (which came into force on October 15), homeless people face community work, fines and finally imprisonment if they reside in public spaces that are qualified as world heritage sites, and they do not leave upon the order of the authorities. This means, that homelessness is criminalized and can be punished in the entire downtown area of Budapest and the city center of another major city Pécs.

The parliamentary majority enacted this law despite the Hungarian Constitutional Court’s decision in November 2012 that the criminalization of homelessness is incompatible with the protection of human dignity and therefore unconstitutional. With this decision, the Court annulled a similar earlier legislation. In response, the governing parties wrote it into the constitution that Parliament and local authorities can criminalize homelessness. Now, the new law prohibits homelessness in World Heritage sites and their buffer zones.

By passing this legislation, the governing parties ignored the widespread national and international outcry against the criminalization of homelessness. The government’s punitive approach has been condemned by the Parliamentary Commissioner for Fundamental Rights, the Hungarian Civil Liberties Union, the social policy and social work department of Eötvös Loránd University, the national and Budapest-wide umbrella organizations of homeless service providers, Habitat for Humanity Hungary, and a number of religious communities and political parties as well. The criminalization of homelessness in Hungary was also denounced by Amnesty International, Human Rights Watch, two special rapporteurs of the United Nations and the European Federation of National Organisations Working with the Homeless (FEANTSA).

You are the director of a prestigious international organization whose self-proclaimed goal is – quoting the UNESCO Constitution – “to further universal respect for justice, for the rule of law and for the human rights and fundamental freedoms.” It is our firm conviction that you cannot be oblivious to the fact that the Hungarian government has used the UNESCO World Heritage protection to severely violate homeless people’s rights as well as the fundamental requirements of justice and rule of law.

We kindly ask you to use all diplomatic means at your disposal to strengthen the international pressure on the Hungarian government to stop the criminalization and persecution of homeless people in Hungary and repeal this inhumane law.

The Hungarian version of the letter can be accessed here.