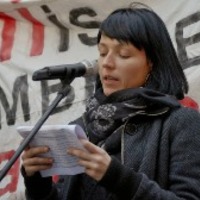 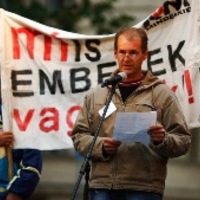 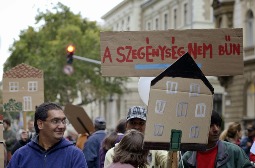 By criminalizing street homelessness, the Hungarian government is once again violating fundamental rights and defies the judgement of the Hungarian Constitutional Court.

On September 30, 2013 hundreds were protesting in Budapest against the modification of the 2012 Petty Offences Act which would allows local governments to create homeless-free zones, i.e. areas where living in public space is considered an offence. According to a late-minute modification by the Minister of Interior, world heritage sites are automatically prohibition zones, but municipalities have the right to designate additional areas as well. As a result of the law, which was adopted by majority the vote of the governing parties, downtown Budapest will be off limits to homeless people who are forced to live on the street.

The prohibition zones can be introduced by local governments. In Budapest, City Council determines these zones, but local districts can also make recommendations and they have to be consulted by City Council about zones in their areas. The law also criminally penalizes constructions in public spaces without permission, which seriously affects the thousands of shack-dwellers in Hungary today. The building of shacks is considered an offence punishable by jail regardless of the zones.

On Monday, hundreds of people attended the public protest against the law organized by The City is for All in front of the Parliament. Miklós Fekete-Nagy, a homeless activist said that the law makes him an exile in his home country along with tens of thousands of fellow homeless people. Zsolt Csizi, a man living in a shack that he built talked said that his home was essential to maintain some privacy and an independent household, something which is totally impossible in overcrowded and sub-standard homeless shelters.

Anna Bende, activist and street social worker stressed that despite allegations by government politicians, official statistics show that there are not enough places for homeless people in the shelter system. In Budapest only, there are at least 4,000 people living in public spaces. She warned that the law is likely to have very dangerous consequences. Once it is passed people living on the streets will be forced into hiding and social workers will not be able to find them, which is especially worrisome with the approaching winter.

The City is for All condemns the law, as it provides no real solutions for homelessness, but simply seeks to cover up the social crisis in Hungary today. The group has long been campaigning for sustainable and long-term solutions for the housing crisis such as the development of the social housing sector, the introduction of more substantial and equitable housing benefits, and the utilization of empty units and buildings.

Photos about the protest

European Parliament hearing about the criminalization of poverty

A brief history of the criminalization of homelessness in Hungary