The criminalization of homelessness in Hungary between 2010 and 2013 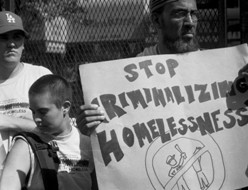 • In December 2010, the clearing of Budapest underground passages begins under the supervision of Mayor István Tarlós. The extra funds that are promised as part of the program never reach the homeless care institutions.

• On 8 December 2010, Parliament adopts an amendment to the law on constructions, which allows for penalizing the improper use of public spaces as a petty offence.

• In December 2010, searching through garbage is banned in the 8th district.

• In April 2011, the General Assembly of Budapest adopts a decree pronouncing habitation in public spaces a petty offence. The very same decree makes street music subject to permission and a payable fee.