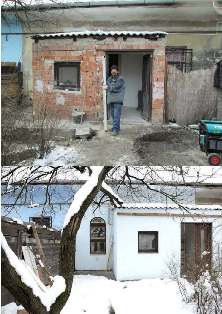 A press conference was organized on March 28th to celebrate the re-housing of two homeless couples, who had lived in the forest for several years, in the 10th district of Budapest. The celebration resulted from a cooperation between various stake-holders, unfortunately not too frequent in Hungary, a country where only 3% of the housing stock serves social purposes.

The organizations that cooperated in the project were the local city hall, the outreach team of the Hungarian Red Cross, and various social NGOs (Van Esély Alapítvány, Alapítvány a Társadalmi Felelősségvállalásért, Bárka Szociális és Gyermekjóléti Központ) as well as The City is for All, a grassroots organization of homeless activists and their supporters fighting for the right of housing. The physical reconstruction of the units was undertaken by the Social Housing Reconstruction Project, a group of volunteers who worked side by side with homeless people.

Mrs. Valéria Molnár, one of the women re-housed with her partner, talked about how glad she was to finally live in proper housing again, after 16 years of living in the forest. She encouraged everyone not to give up hoping that things might get better, as her example shows.

Bulcsú Mihály, an outreach worker of the Hungarian Red Cross, welcomed all the help and goodwill received during the project. He has sworn not to abandon the two couples now that they are no longer living in the forest – so strictly speaking not being entitled to outreach work anymore. He also expressed hope to offer similar solutions to the other 120 rough sleepers in the district that the outreach team visits on a regular basis.

The deputy mayor of the municipality, Tibor Weeber, responding to the question of journalists, admitted that there are 205 empty housing units owned by the municipality of the neighborhood. However, he explained that due the arrears of those living in social housing the district does not have the resources to fix up these units, most of which are currently in a state that is not fit for habitation. He thanked the NGOs present who provided the necessary funding to carry out the repairs (see photos of the reconstruction here).

István Perecz, a homeless activist of the The City is For All, spoke about how this success, though small in itself, can serve as a good practice to other neighborhoods in Budapest (where there are at least 2000 empty housing units owned by local councils) and in the other cities. He mentioned this small scale project as a pioneer one in the housing first framework, and encouraged policy-makers to adapt similar approaches to help those in need of basic housing.

(This  piece was originally written for the FEANTSA newsletter)