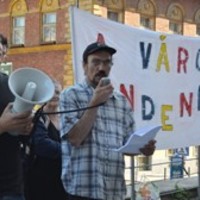 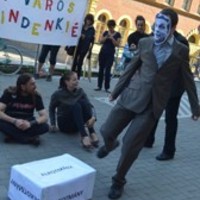 The City is for All: We are not afraid of breaking laws for justice „As a Hungarian citizen, and as a homeless person,
I wanted to take a stand against these laws which punish people for being poor and without a proper home.
- Ferenc Sziráki, a homeless participant of the sit-in

The first court ruling about the sit-in that took place in October 2011 against the criminalization of homelessness – in which several members of The City is for All (AVM) took part – was announced today. According to the judge, the activists protesting criminalization are guilty of misdemeanor. The members of AVM our proud of what they did: if we need to, we will engage in civil disobedience again, and we encourage other groups of the democratic opposition to do the same.

The City is for All has been fighting against the exclusion and police harassment of homeless people since its founding. Our first protest in 2009 was directed against the ex-mayor of Budapest’s 11th district (a member of the “socialist” party), who announced the establishment of “homeless-free zones”. Since then, the penalization of homelessness became official government policy. The ruling neo-conservative party, Fidesz, considers homeless people second-class citizens and criminals. First the city assembly of Budapest passed an ordinance that made it a misdemeanor to sleep in public spaces. This was followed by a law passed by the Parliament, which made sleeping rough punishable with jail.

Several members of our group took part in the sit-in in the office of Máté Kocsis, who was one of the sponsors of the law about the imprisonment of those sleeping rough, and who has been at the forefront of the current anti-homeless campaign. We sat there, altogether around 30 people, silently, and we let the police know that we would not leave until they revoke the cruel and unconstitutional law. The law was not revoked, instead Máté Kocsis called the police who arrested and fined us. Legal defense for the activists was provided by dr. Tamás Fazekas of the Hungarian Civil Liberties Union. Today’s court ruling found Ferenc Sziráki, a homeless member of AVM, and one of the participants in the sit-in, guilty of “disobedience to lawful action by the authorities”, and – in consideration of his “impeccable record” – gave him a warning.

The City is for All will work against these unlawful, cruel and oppressive policies of criminalization as long as it takes – we are not afraid of warnings or misdemeanor charges. We will engage again in civil disobedience if necessary. „If this sit-in was tomorrow, I would take part in it the same way – no matter how many court cases they make of it” – said Ferenc Sziráki after the court ruling.

Our group encourages all the other groups of the democratic opposition to say “no” to the authorities if their conscience demands it, and to engage in civil disobedience if it is necessary. There is nothing more threatening to an oppressive regime than committed citizens who are willing to risk arrests in defense of democracy, the rule of law, and social justice.

The City is for All was founded in August 2009 by homeless, and formerly homeless activists and their allies who fight for a society based on equality and justice. The group aims to create an opportunity for homeless people to stand up for their dignity and fight for the right to housing. Homeless people play a leading role in all the group’s activities. More information: avarosmindenkie.blog.hu/tags/english